When, some years ago, an editor commissioned a series for the re-telling of modern fairytales, I had a terrific time writing them, but I saved what I believed to be the best until last.
Little Red Riding Hood has to be one of the most famous of all children’s stories, as well as one of the most macabre.  It’s woven itself into our folklore – it’s been told and re-told until it’s threadbare.

It’s been the subject of countless films and cartoons, and it even appeared in an advertisement in 1891, in which Red Riding Hood can be seen artlessly offering her grandmother a cup of Fry’s Cocoa.

As a child I had a terror of that story, which I read by mistake, having found an ancient copy thrust into the back of a cupboard.  The pages were dry and they smelled of age and forgotten memories.  The illustrations (probably by Gustave Doré), were harrowing, but I read the story with a kind of horrified compulsion. Afterwards I had nightmares about wolves.

‘Oh, you don’t need to worry about wolves,’ said my practical mother, finally appealed to for reassurance.  ‘There aren’t any in England nowadays.  Henry VIII got rid of them all,’ she added cheerfully, as if she visualised Henry yomping across the countryside, personally routing every last wolf.

And yet, all those years later, nightmares and Henry Tudor aside, I discovered that a modern version of Little Red Riding Hood was the book I wanted to write.  With the realisation, came the title.  Wildwood.

The genesis of Wildwood’s setting came from an ancient Derbyshire legend, uncovered during a visit to a tiny place called Millers Dale.  I thought, in a general way, that it would make a nice and appropriate background.  But deeper investigation revealed the unsuspected, but intriguing, existence of the Foljambe family and led to the discovery of an unexpected and slightly disconcerting coincidence.

The Foljambes are documented in old Derbyshire records, and although the records are somewhat fragmentary, their provenance appears to be authentic.  Little first-hand evidence of the family’s origins is available, but fascinating glimpses emerged during the searches.

In the time of William the Conqueror (1066-1087), the Foljambes were enfeoffed as hereditary foresters.  I do love that word enfeoffed even though I had to look it up to be sure of its meaning.  It’s a 14th century word, from the Anglo-French, and Collins English Dictionary, probably one of the most used books on my shelves, has this to say about it:

[1]  To invest a person with possession of a freehold estate in land
[2]  In feudal society, to take someone into vassalage by giving a fee or fief in return for certain services.

So, the Foljambes were enfeoffed as hereditary foresters – a royal appointment which certainly included the slaying of wolves in the dense forests that covered a great part of the land.
The family was evidently successful in this part of its curious calling, since an entry in the Pipe Rolls of Henry II (1154-1189) refers to a sum of 25 shillings being paid to them as an extra fee for pursuing their profession over in Normandy – possibly at the request of the king.
In 1214 a Thomas Foljambe was knighted, and nearly a hundred years later, in 1301, Foljambe sons were summoned to the muster (which is another beautiful old expression, I think), at Berwick-upon-Tweed, to fight the Scots in the armies of the glittering Edward Plantagenet – the infamous battle in which the Stone of Destiny was seized from Scone Abbey by the English.

My enquiries and research indicated that the family had almost certainly died out when I wrote Wildwood.  I did though – and I still do – tender my apologies to any descendants that might still be living today, for making so free with their history.  But almost certainly they were wolf-hunters in the dense dark wildwoods that sprawled across the England of those years.

I loved writing Wildwood, my own version of this legend, and since its original UK publication, it’s been resurrected several times, in different versions, and in more than one language.  In particular, German publishers issued it as Nachtwald, and with this title it’s recently been made available by Endeavour Media as an ebook, under the pseudonym I was using at that time – Frances Gordon.

Here’s the link for ordering and downloading Nachtwald:

It was, admittedly, a strange request to make, and it must have sounded very peculiar indeed over the phone, because initially the voice at the other end was suspicious.

‘What kind of research for a novel?’

I explained.  ‘I need to know if a church organ can make any kind of sound after it’s been abandoned for about fifty years.’

‘Do you mean one of the characters jettisons a church organ somewhere?’

‘Oh, no.  The church in the book – well, actually I’ve made it the entire village – has been abandoned after chemical warfare testing in the 1960s.’

‘Oh, I see.  Like that place in Scotland – Anthrax Island.  Or Sellafield.’

I thanked whatever gods might be appropriate for the sometimes-contentious, occasionally-mysterious Cold War research that has become uneasily etched onto the fabric of England’s folklore, and said that yes, this was exactly what I meant. A forsaken village – actually a poisoned village.  And, this clarified, the suspicious gentleman – who held the daunting title of Music Director of something-or-other for several counties – was instantly intrigued and amazingly helpful.

Ten days later I went out to a fourteenth century church to meet him and someone from a firm of organ tuners and restorers.

It turned into quite a party.  The organ-builders had come in a force of three, (grandfather, father and son), the Music Director came along to unlock the church, and a couple of grave-diggers, who were leaning on their spades outside the church exchanging epigrammatical wit like the last act of Hamlet, got involved as well.  Inside the church it seemed some of the organ pipes had become clogged and needed cleaning.  Something might have got into them, said the elder statesman of the trio. (At this point Hamlet seemed to have yielded place to an episode of Dad’s Army – the one where they hide the pigeons in the organ loft.) 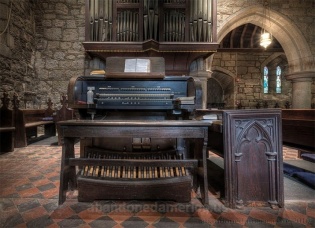 I explained the problem again. I wanted a church organ, abandoned for half a century in a desolate and eerie old church, to emit recognisable sounds when the village was re-opened.  The organ itself would most likely be half-rotting, but it had to be still capable of creating music.

This was greeted with silence, so I said, ‘I don’t mean a Bach fugue needs to be bashed out, just a few chords.  Or,’ I said hopefully, as the silence lengthened, ‘a single note.  Any note would do.’

By this time I was ready to abandon the plot, write a totally different book in the hope that my editor would have forgotten the original synopsis, and beat it out of the Saxon arch door.

But incredibly, stops were pulled out (literally and metaphorically), and the trio of organ-makers nodded solemnly, and said, yes, it could be done.  A wooden organ-frame would rot, but metal wind pipes were indestructible.  You might drop a set of metal organ pipes in the Atlantic ocean, if you were so minded, and leave them there for a hundred years.  They would still be capable of producing sound.  The trio proceeded to dismantle the organ there and then, cheerfully calling down to one another as they did so to mind your toes, silly beggar, the E-flat’s coming down.

They spread the metal wind pipes at my feet, and said I could have whatever sound I wanted.  Thin reedy sounds from the small pipes, booming sonerous ones from the large ones.  It was just a question of blowing into each pipe – two or three together if it could be managed.  It was pretty much the same principle as a flute or a recorder.

They proceeded to demonstrate.  The smallest pipe gave a happy tootle, which sounded like a 1930’s Mercedes.  At the other end of the scale was a massive giant’s-drainpipe structure, which took all three men to lift it.  That sounded like the QE2 coming in to dock.

The grave-diggers came in at this point and helped out by trying to play Three Blind Mice.

‘Try it for yourself,’ said the senior organ tuner to me, so I did.  I tried them all, in turn, from falsetto to bass. It was a lot more fun than I had expected, and best of all, the sounds were exactly what I wanted.  The musically-knowledgeable hero could very easily prowl through the shadowy desolation of the old church, and try to re-create a fragment of its plainchant history with several of the dispersed pipes. The villain, up to no good outside, could be very satisfactorily spooked by the sounds.

Research for psychological thrillers, has frequently taken me into some extremely dark places, but the morning I spent with three organ builders and tuners, a County Music Director, and two gravediggers, while researching for background to What Lies Beneath, was one of the very nicest and most entertaining pieces of field research I have ever carried out.

It’s a fact of life that there are times when the shadow can be mightier than the substance.

Over ninety years ago the German film-maker F.W. Murnau chilled cinema audiences with the 1922 silent movie, Nosferatu.  It’s still chilling people today, and probably the creepiest scene of all is where the vampiric  Count Orlok steals up the dark stairway, only his shadow visible on the wall.  Thus sparking off a tradition that was to go from Hammer to Twilight, and provide a stream of starring roles for actors capable of turning on sinister charm at the drop of a garlic clove.

In the 1960s film-makers again became aware that what you don’t see is often scarier than what you do.  Anyone who watched Hitchock’s The Birds will remember how menacing it was when ordinary birds began to gather on rooftops.   And with Roman Polanksi’s Rosemary’s Baby, did we actually see the demon who attacked Mia Farrow?  My memory is that we didn’t, although it’s always possible I had gone out to buy the popcorn at that point.

Fiction writers have always known that what you don’t see can be a whole lot scarier than what you do see, but sometimes there’s an irresistible temptation to add that last swish of the knife, to include that extra 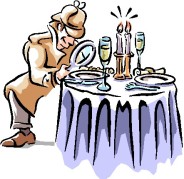 The famous and exclusive Detection Club, (think Dorothy L. Sayers, Agatha Christie, G.K. Chesterton), reportedly required (and indeed may still require), its members to take an oath, part of which warns them to avoid: ‘Sinister Chinamen,’ (doubtless a sly nod there to Sax Rohmer, creator of the Fu Manchu books), as well as ‘divine revelations, and poisons unknown to science’.  The oath also apparently forbade members to purloin other people’s plots, ‘whether under the influence of drink or not’, but that’s probably another story.

Translated into a warning to writers of pyschological thrillers, this oath might read:  ‘Let there be no superfluity of splattering gore, no unnecessarily-festering corpses, no wild-eyed axe-killers or gibbering maniacs springing out of cupboards.  Instead, let there be the midnight creak on the stair, the whisk of something sinister disappearing round a corner, a glimpse of the shirt-tail of a ghost rather than a glimpse of the ghost itself…’       And let the chills be understated, and let the reader’s own imagination fill in the blanks.

Because it’s another undoubted fact that radio has some of the best pictures. END_OF_DOCUMENT_TOKEN_TO_BE_REPLACED